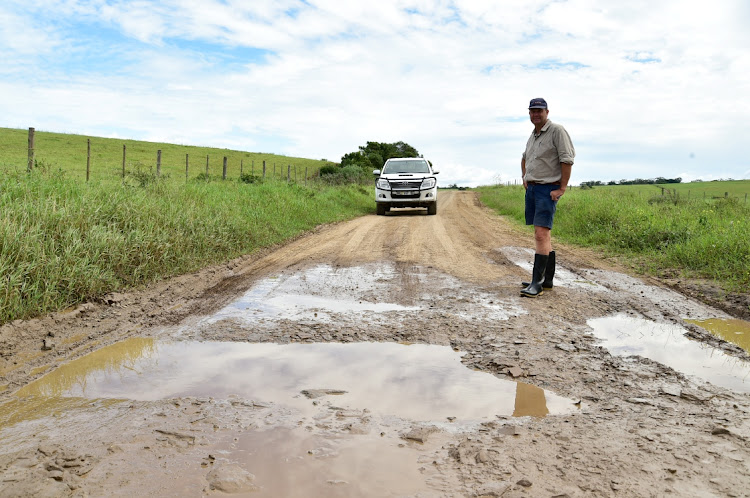 Zuney Valley dairy farmer Cliffie Biggs points out one of the many bad patches along the busy DR1948
Image: Eugene Coetzee

They are the lifeblood of the province used to ferry produce to markets, rural communities to clinics and kids to school — but their value has been wasting away. Now the court has ordered that they must be rescued.

That’s the essence of a judgment made this week in the Grahamstown high court which ordered the Eastern Cape transport department to fix the province’s neglected and disintegrating network of rural public gravel roads.

The order follows nearly four years of litigation by Agri Eastern Cape to force the department, through its most senior officials, to do its duty.

In the Zuney Valley south of the R72 between Nanaga and Alexandria, beef farmer Henk Klopper said he had been forced to spend R200,000 repairing a nearly impassable 2km stretch of gravel public road and installing a bridge after debilitating losses.

“We were exporting cattle to Mauritius but the trucks could not get through so there were huge economic consequences. The damage to vehicles was unbelievable. Our kids could not get to school except with a 4X4.”

In the same area, Cliffie Biggs said he and his neighbouring dairy farmers were heavily reliant on the DR1955 road and its arterials.

“Each year we truck out about 28-million litres of milk and, because our product has no shelf life, it has to be fetched every day.

“We also need to bring in lucerne, orange pulp, fertilisers and maize supplements for our cattle.

“Besides this activity there are also silage contractors who use the roads, hardware delivery guys and veterinary product representatives.

“So there is a lot of traffic and it’s all essential to us managing our farms properly and keeping this economy going.”

Biggs, who represents the Zuney farmers on the Sundays River Valley municipality road maintenance committee, said a budget of R8.8m a year had been allocated to maintain 800km of public gravel road across the whole municipality.

This was sufficient to get to only the most basic maintenance and farmers had to do the rest, paying according to how far along a particular road they were situated and how often they used it.

He pointed out where farmers had cut back verges to avoid pooling water and blind spots and other places where potholes had been filled and surfaces graded and re-gravelled.

At one point, because of insufficient gravelling a slight incline had become highly dangerous in wet weather, the reduced traction turning it into a skating rink which caused 40-ton trucks to jackknife.

Biggs said the last year had been the worst for him in more than 30 years of farming because of the worsening financial situation, and the roads challenge did not make it easier.

In her judgment on Tuesday, high court judge Nomathamsanqa Beshe said MEC Weziwe Tikana and her director-general, together with the Makana municipality as the three respondents in the matter, had a month to report back on exactly which roads it was going to fix first, and by when.

Considering the efforts since 2016 by Agri Eastern Cape to get the department to fix the roads, Beshe said the organisation had every reason to seek the intervention of the court, in her view.

“The respondents have displayed a clear unpreparedness to give effect to the terms of the agreement they concluded with the applicants.”

Focusing on a May 12 2016 ruling on the same matter by judge John Smith, Beshe said it hinged on an understanding that the MEC and her co-respondents would file reports on envisaged steps to be taken to repair roads.

The matter then came before judge Judith Roberson, who amplified the ruling with a detailed order.

The MEC chose instead to take the matter to the Supreme Court of Appeal.

Shortly before it was heard, however, after a proposal from the respondents, the matter was settled out of court by means of an agreement, which was signed on May 16 2018, Beshe said.

“What followed are attempts by those representing [Agri EC] to get respondents to sign the agreement, which came to nought.” A dangerous section of road on the DRO2816 road near Cathcart in the Toise-Rexfield area
Image: Supplied

The matter went to court again, and when the MEC and her co-respondents still failed to sign the agreement which her own counsel had initiated, the sheriff was authorised to sign the document on their behalf.

When Tikana continued to fail to implement the conditions of the agreement, the organisation took the matter back to court to seek a court order.

Granting the application, Beshe ordered the enforcement of the 2016 agreement which states that Agri EC should provide the department with information to help prioritise its repair work, and the department should in turn “give effect to the requirements”.

The MEC and her co-respondents should further “within 30 days ... record and report on all future maintenance to occur in respect of the identified roads and the anticipated dates on which such maintenance shall occur”, the judge said.

Agri EC president Douglas Stern said the organisation was delighted with the judgment.

“The most important aspect is that it enables us to annually make input into the budget allocation of the department,” Stern said.

“Furthermore, if we are dissatisfied with reasons given for any allocation, we are now able to approach the high court for relief.” 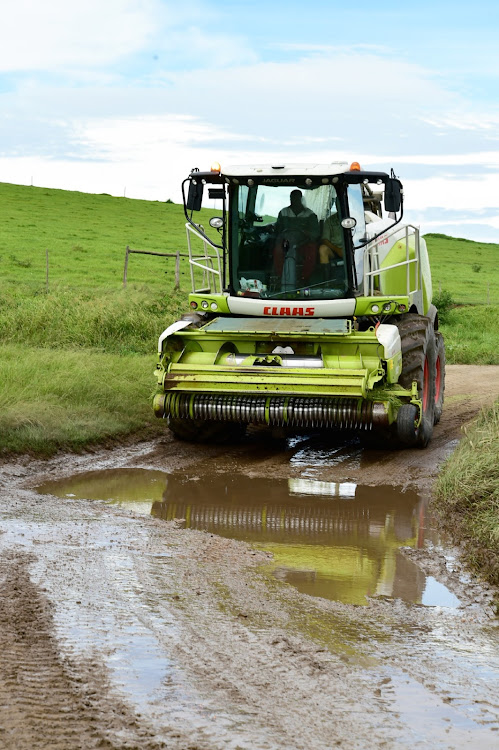 An R8m grass harvester negotiates a difficult stretch on the R1955. Badly maintained gravel roads across the Eastern Cape cause many millions of rands damage to farm vehicles and equipment every year
Image: Eugene Coetzee

He said it was hard to pinpoint the worst roads as there were dire examples all over the province, but the Transkei had some of the worst. Likewise, all the different farming sectors were affected, but the milk producers because they had to transport milk off their farms every day were some of the worst hit.

“I get complaints daily and it’s costing farmers millions with damage to vehicles and problems with getting produce to market.”

“But it’s not just us, it’s something that affects tourism, medical and police services and all rural communities.”

Through its large farmer member base Agri EC had eyes and ears on the ground across the province and the hope was that the department would now engage proactively with the organisation to resolve rural road maintenance issues, he said.

“If the department does not now adhere to the provisions of this order, we will not hesitate to institute contempt of court proceedings.” 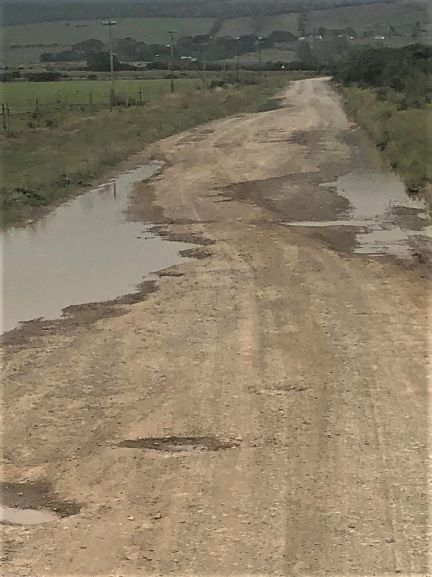 With a lack of regular grading and regravelling many of the public gravel roads in the Eastern Cape are potholed and have lost the camber they need for good rainfall run-off
Image: Supplied