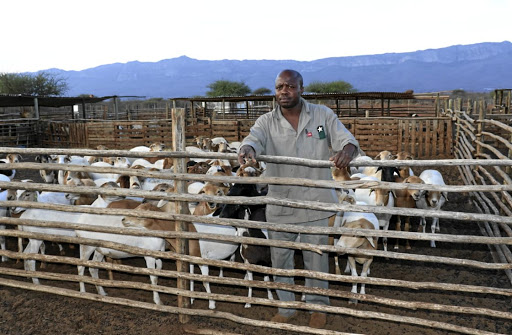 Emmanuel Mudau went from being a furniture shop sales representative to a celebrated Limpopo sheep farmer.

Mudau, 34, from Ha-Ravele village near Makhado in Venda, is a self-taught sheep breeder who owns hundreds of sheep and goats.

Born in abject poverty and raised by a single father, Mudau started farming in 2009 with three goats he bought from a local man with his pension money that he got after resigning at a furniture shop.

"Then in 2010 I bought 10 Damara sheep, a Namibian breed, with money I got from selling the goats. I continued farming from my backyard."

His customers were mainly local people who would be having traditional ceremonies and needed to slaughter either a goat or sheep.

He is now producing his own breed called Matuba genetics, a mix-breed made up of Dorper, Van Rooy and Pedi sheep breeds.

"Farming is very effective in fighting poverty and hunger. I was born from a destitute family in Tshiozwi.

"Things were tough and I used to go to bed on an empty stomach," he said.

Mudau said he tried everything possible to get a meal, including helping neighbours with their errands just for a loaf of bread.

"I got a job at a furniture shop where I was a sales consultant. Then I resigned to follow my heart and ventured into farming," he said.

"I bought three goats from a certain old man in my village. Today as I speak, I own about 250 bosvelder sheep and 120 indigenous goats. I'm able to put food on the table for my family," Mudau said.

Through his hard work, Mudau is also now selling his breed at auctions across the country and that has made his work to be recognised.

Mudau said his dream is to grow his business and also to transfer his farming skills to rural youths. "I just acquired 20 hectares of land where I'm farming at the moment. I want to encourage young people to work the land and venture into farming.

"Our government should make land accessible because it still remains a challenge for young black farmers," he said.