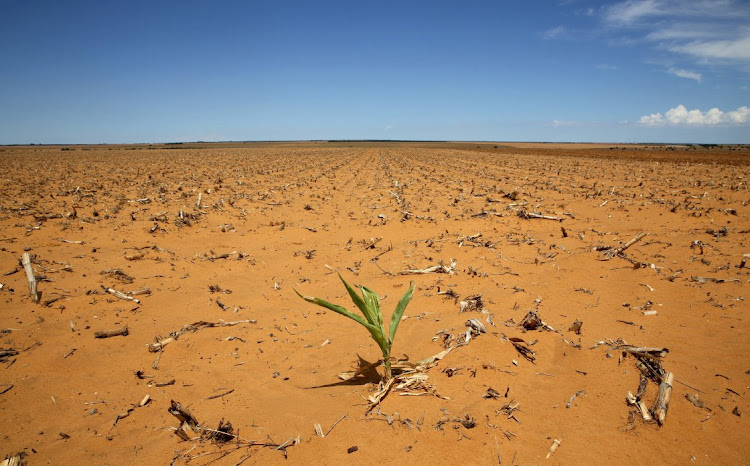 DRY AS A BONE: A mielie field in Hoopstad, a maize-producing district in the Free State
Image: REUTERS/SIPHIWE SIBEKO

The agricultural sector is calling on the government for financial aid to alleviate the debilitating drought , which has cost the industry billions of rand.

The industry contributes 2% to the economy,

SA is the most food-secure country in Southern Africa, with agriculture viewed as the best vehicle to address poverty and revive rural economies, according to Agri SA.

However, the drought is threatening the livelihoods of SA farmers and their workers as there seems to be no end in sight to the dry spell that has resulted in the deaths of thousands of livestock.

Farmers are also behind schedule in planting summer crops including maize, soybeans, sunflower, sorghum and peanuts.

On Tuesday, Agri SA briefed the media on the impact of drought in the sector and the crisis in the  rural economy.

He said real agriculture output was 9.2% lower in the first half of 2019 than in the corresponding period of 2018.

“The drought conditions of 2013, 2015, 2016 and 2019 have left many maize producers in the North West and parts of the Free State in a very challenging environment,” Symington said.

Red Meat Producers Organisation CEO Gerhard Schutte  said R16bn had been taken out of the red meat industry in 2019, compared with 2018.

“The good news is that in SA we have adaptable animals, and in spite of this drought we are very competitive.

“We are 30% below the international norm in producer prices,” he said.

“What also counts in our favour is that we have a well-developed, modern feedlot industry.

“[But] we need soft loans, insurance and aid from the government, not only for the emerging sector but for commercial sector as well.”

The Agri SA drought disaster fund has disbursed R3.4m to Agri Western Cape, R1.3m to Agri Eastern Cape, R4.2m to Agri Northern Cape, R9.9m to other provinces, R100m for other donations for transport, humanitarian and boreholes, R19m for cash donations, and R1.5m for diesel donations.  —BusinessLIVE